Starting in 2021, executive producer VOLO Events hired Xite to become a main content and technology solutions provider for Gala Games’ conferences. XiteLabs used its expertise in visual content creation to bring to life a diverse array of screens at Gala Games’ Into the Galaverse. The event took place in Las Vegas, NV in December 2021. In addition, XiteLabs was then brought on again in February 2022 for a similar scope of work at a one day conference announcing the official launch of Gala Music. Following Gala Music, in June 2022 VOLO and Gala invited XiteLabs out for their third official collaboration for their European conference in Malta, off the coast of Sicily.

All Gala shows were produced in partnership with VOLO Events Agency, a leading producer of live events and experiential marketing activations for some of the world’s leading brands. VOLO is led by Emmy Award-winning Producer, Charles Marto, who served as Executive Producer and Producer for Galaverse. For 35 years, Marto has produced notable events, network television celebrity music specials, and immersive experiences for brands. The conferences fuse gaming, music, and NFTs through first-of-their-kind experiences.

Gala Games and VOLO Events Agency have come to rely heavily on Xite for its virtual production and Unreal Engine workflows. Additional technologies employed include Octane Renderer, Cinema 4D, and Disguise. Moreover, XiteLabs broke new barriers by using one of the largest live nDisplay systems the team has ever deployed. Above all, this allowed for great flexibility, onsite programming, and dynamic changes right up until when the show went live.

Scope of Work for Into the Galaverse

XiteLabs was brought onboard for Into the Galaverse in December 2021 to deliver content as well as technology and operations solutions. The octagonal shaped entertainment space for “Into the Galaverse” served as the central hub of the event. In addition, the room displayed dynamic video content created in Unreal Engine, which was presented across the 8 projection screens and a large central LED using nDisplay. 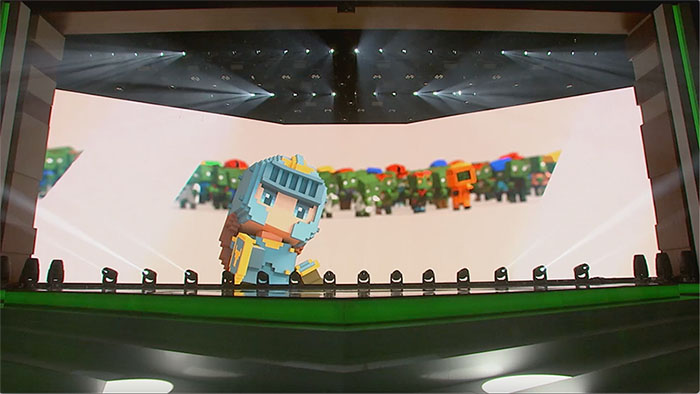 Scope of Work for Gala Music

For the Gala Music event, Xite utilized Unreal Engine for the Q&A and presentation portions of the event. Most notably these visuals served as backdrops for an interview with Steve Aoki and live presentations from the likes of Gala COO Sarah Buxton. Moreover, Xite also provided visual content for musical performers BT, Bassjackers, and 3LAU as well as the dance performance portion of the event. Additionally, the Gala Music event featured live performances from renowned music artists such as Kings of Leon, H.E.R., Snoop Dogg, Steve Aoki, and more.

Scope of Work for Gala EU